The novel (new) virus known as 2019- nCoV continues to spread throughout China and to countries across the world, the big question is: How long will the outbreak last—and how bad will it get? While some doctors have made predictions based on outbreaks of similar coronaviruses like severe acute respiratory syndrome (SARS) and Middle East respiratory syndrome (MERS), the short, if unsatisfying, answer is that no one is exactly sure.

The novel coronavirus, which was first found in Wuhan, China, is not identical to either SARS or MERS, but the viruses cause some similar symptoms, including cough, fever and trouble breathing, which sometimes progresses to serious respiratory distress.

Human coronaviruses (CoV) are a large family of viruses that can cause a variety of illnesses ranging from the common cold to severe diseases like Middle East respiratory syndrome (MERS-CoV) and Severe Acute respiratory syndrome (SARS-CoV). The World Health Organization says this Novel Coronavirus (nCoV) is a new strain that had not been previously identified in humans until late 2019.

Human coronavirus was first discovered in 1965 and accounts for many cases of the common cold. The virus gets its name from its crown-like shape. Coronaviruses are zoonotic, which means they’re transmitted between animals and people. SARS-CoV was transmitted from civet cats to humans and researchers suspect MERS-CoV is transmitted from dromedary camels to humans

A New Disk for detoxing the body from heavy metalsagosto 14, 2020 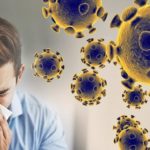